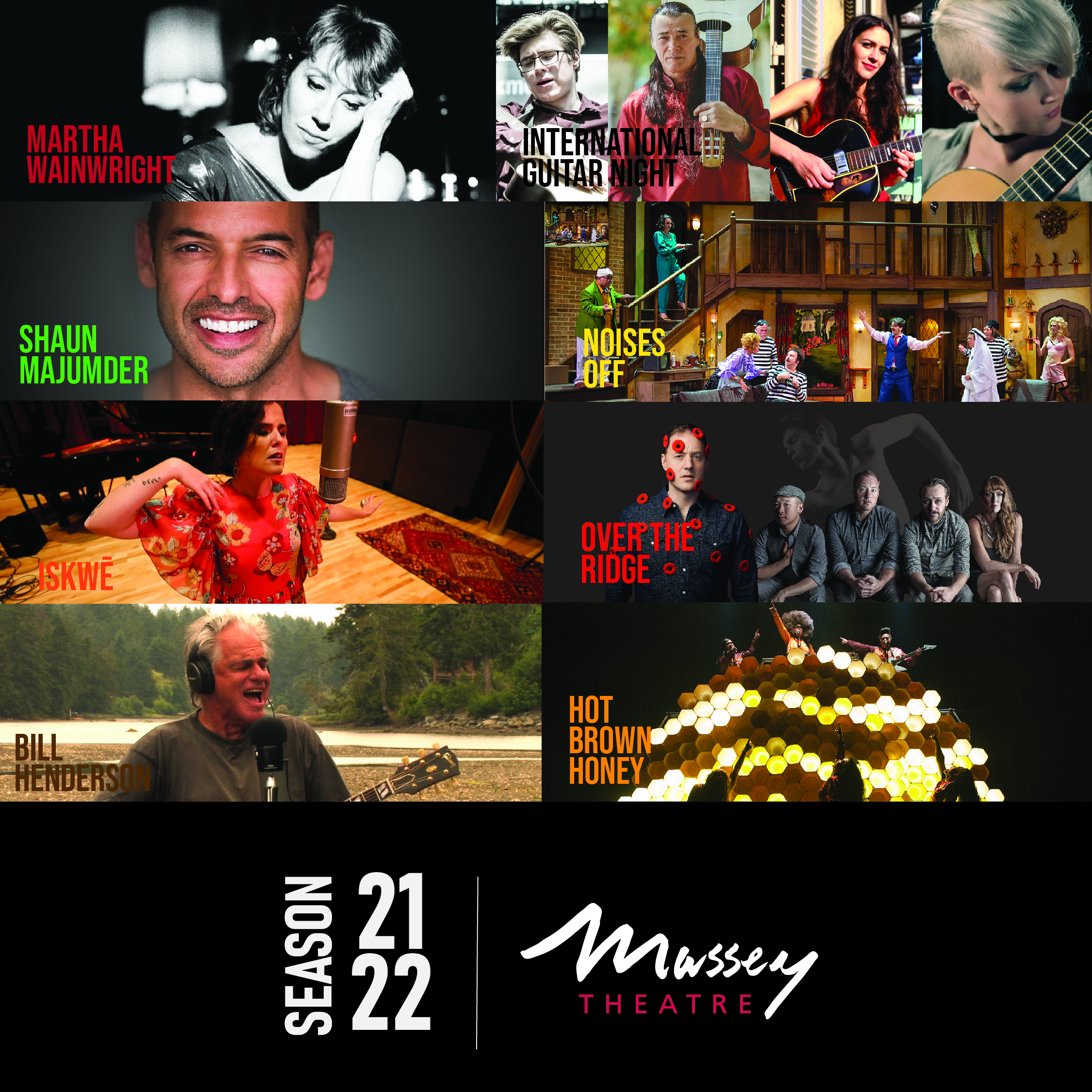 We are more than excited. We are overjoyed to be able to announce that the theatre will be opening its doors this fall with a dynamic season!  As the Province  reopens in a safe and responsible way, audiences will be welcomed to the theatre to come and enjoy theatrical performances, as they are meant to be. Live and in person

The Massey Theatre season reflects the diverse lenses and interests of the community with a variety of exceptional performances. Included are iconic musical performers of contemporary Indigenous, pop, folk, rock and guitar jazz. The range of artists is incredible-from Martha Wainwright to Bill Henderson to International Guitar Night.   Folk rock powerhouse band The Fugitives explore the realities and lore of Vimy Ridge in a multi-disciplinary concert with the dancers of Ballet BC and spoken word of Brendan McLeod. Musical artist and storyteller, iskwē, shares her impactful artistry with music, movement, images, poetry and prose.

The return season also promises to brighten our hearts with laughter.  Comedy will take centre stage with the former “This Hour has 22 Minutes” star Shaun Majumder and  his new show, The LOVE tour. A special two week run of Arts Club Theatre Company’s hit show Noises Off offers one of the largest and most fun productions we will see in the coming season. Massey Theatre has been working with Arts Club for over a year to bring back the 2020 hit to delight audiences in the way only live theatre can do.

November 2021
Bill Henderson, Solo Tour
In his solo tour, Canadian Rock Icon Bill Henderson of Chilliwack takes the stage like the legend he is.  Guitar at the ready. Iconic voice filling the theatre. For those of you who are ready to revisit Henderson’s distinct style of rock…the Massey is ready for you. Tickets on sale soon

Feb 3, 2022
Shaun Majumder The LOVE Tour
In 2019, beloved comedian and performer Shaun Majumder brought his complex tour de force HATE to Massey Theatre, much of it in response to living amid rampant Trumpism and the rise of hate he was witnessing in the US and Canada. Now, the new dad flips the narrative in with his new show LOVE. Majumder is an absolute comedy star, riveting and hilarious. This show is co-presented with Laughter Zone 101. Tickets on sale now.

February 15-27, 2022
Arts Club Theatre Company’s Noises Off by Michael Frayn
The pre-pandemic hit show is being remounted on the Massey Stage. Noises Off, hailed as the funniest farce ever written, treats audiences to a hilarious peek at a second-tier acting troupe performing a show. With egos, insecurities, and tempers flaring backstage—and forgotten lines, missed cues, and misplaced sardines onstage—this cast threatens to strike the old adage “the show must go on.” Michael Frayn’s dizzying play-within-a-play classic is sure to leave you doubled over with laughter. This is sure to be one of the largest and most fun productions to be staged in the coming season. Tickets on sale now.

March 12, 2022
iskwē
iskwē | ᐃᐢᑫᐧᐤ (short for waseskwan iskwew, meaning “blue sky woman”) is, among many other things, an artist – a creator and communicator of music and of movement, of pictures, poetry and prose. And through it all, she’s a teller of stories that have impacted our past and will inform our future. Her solo tour brings timely magic and light to the Massey. Tickets on sale now.

Spring 2022
Over The Ridge
Often called the “battle that made Canada,” Vimy Ridge resulted in over 10,000 Canadian casualties. Through direct storytelling, verbatim theatre, live music and dance, Brendan McLeod, folk rock powerhouse band The Fugitives, choreographer Jacob Williams and the dancers of Ballet BC examine misconceptions, personal accounts by the actual young soldiers from the battle. This multi-disciplinary concert is an emotional, powerful and evocative look at our Nation’s past. Tickets on sale soon

Fall 2022
Hot Brown Honey
Hot Brown Honey, the smash-hit, genre defying, firecracker of a show from Australia, that’s taken the world by storm is coming to the Massey Theatre.
Steeped in the Word of the Mother and packing a potent punch of Hip-Hop Politics, the show is equal parts theatrical masterpiece and social activism with a posse of phenomenal women who smash stereotypes in a celebration of our similarities and differences. From dance to spoken word, hip hop to performance art, Hot Brown Honey will make you laugh until you cry, clap until your hands bleed and shake every part of what your mama gave you. Tickets on sale soon

Ticket are on sale for some of these shows already, so don’t wait to be entertained. Not only will you be supporting the arts and artists, you will lift your spirits with the unique joy that only culture can provide.

All safety protocols will be in place and guidelines followed. Less than 50% of seats are being sold until reopening guidelines are in place for each date.

All shows are presented with support of the City of New Westminster and the Province of British Columbia. Additionally, iskwē and Hot Brown Honey are posted with the support of the Vancouver Foundation.

We can’t wait to welcome you back.