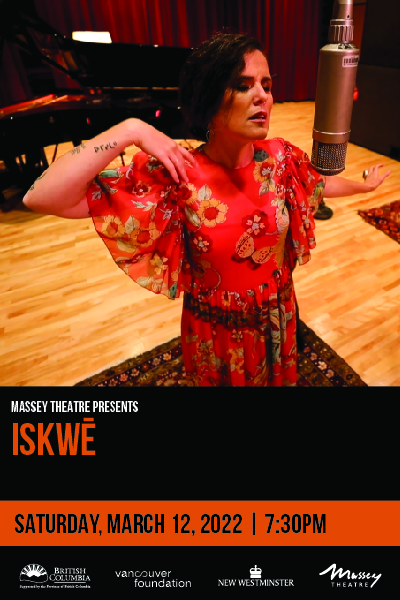 iskwē | ᐃᐢᑫᐧᐤ (short for waseskwan iskwew, meaning “blue sky woman”) is, among many other things, an artist – a creator and communicator of music and of movement, of pictures, poetry and prose. And through it all, she’s a teller of stories that have impacted our past and will inform our future. Her solo tour brings timely magic and light to the Massey.

iskwē’s album The Fight Within (2017) was JUNO-nominated for Indigenous Music Album of the Year (2018) and garnered her a spot on the Polaris Long List.

iskwē’s message is arguably most impactful when delivered from the stage, where it’s not uncommon for people to leave in entranced contemplation or even in tears. Music merges with dance, multimedia, and more in a completely engulfing and cathartic experience – one meant to bring people together and celebrate that which unites over that which divides.

She has performed hundreds of shows in Canada and internationally, including Canadian highlights at Ottawa’s Parliament Hill and a triumphant performance with Canada’s National Arts Centre Orchestra, in New York City at the Met and SummerStage in Central Park, and beyond for the King and Queen of Sweden, Reeperbahn in Germany, and Border Crossing’s Origins Festival in England. iskwē is an ambassador and program participant for the PRS Keychange initiative.

iskwē is Cree Métis from Treaty One Territory. She was born and raised in Winnipeg, Manitoba, Canada. She is an urban Indigenous two-spirited woman from the Red River Valley, the birthplace of the Métis Nation.

Capacity is currently capped at 500 and ticket buyers are required to purchase a minimum of two tickets. Initially tickets will be sold by General Admission. Nearer to each event date, seats will be assigned based on permitted seating plans.

If seating capacity is expanded or increased at any time following this purchase due to government regulations or recommendation, the venue, at its sole discretion, will determine the validity of tickets. If tickets are unfullfillable, refunds will be issued at the time of such a decision and purchasers will be notified.

Presented with support of the Vancouver Foundation, City of New Westminster and the Province of British Columbia.