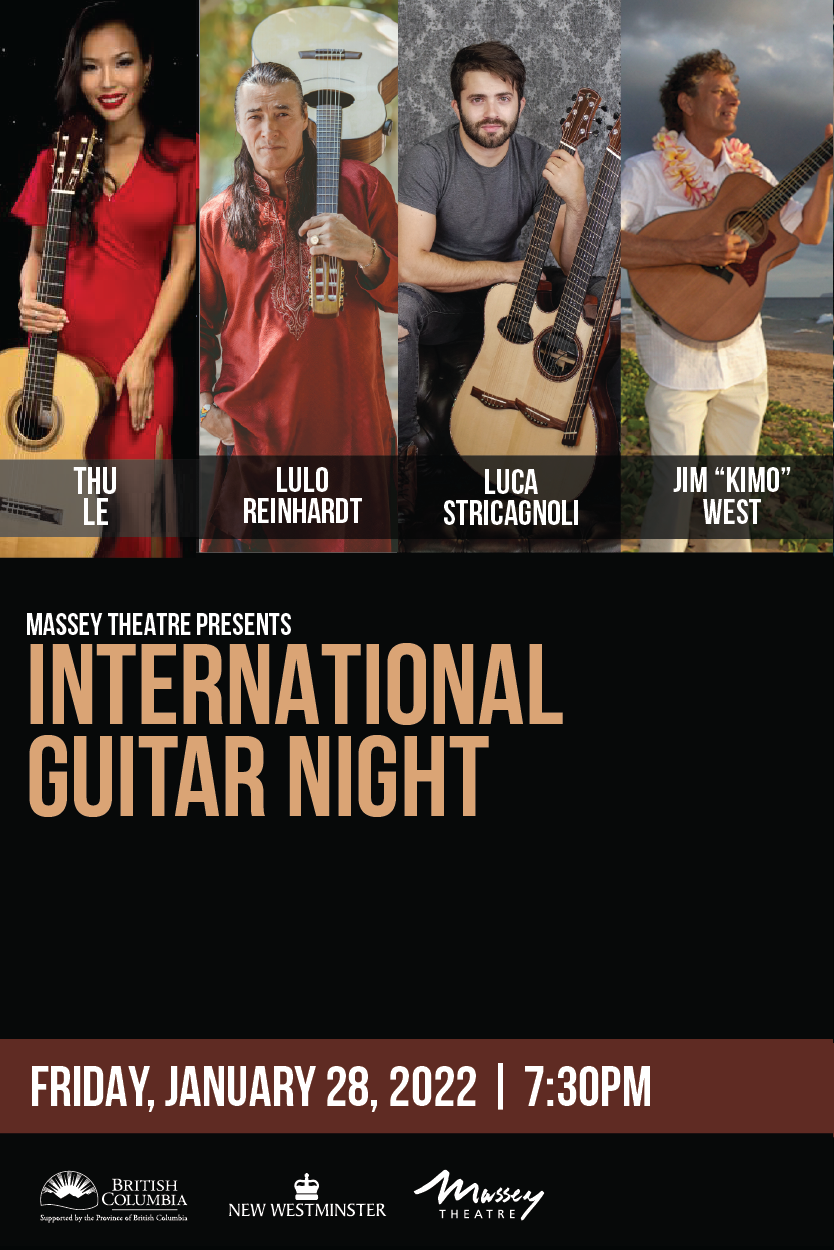 With a huge online following (over 200 million views of his music videos), and with bookings in every corner of the globe, Luca Stricagnoli has been hailed as a phenomenon and a guitar prodigy.  Luca has brought his unique style of re-arranging rock classics for acoustic guitar,  played on self-invented instruments like the Reversed Triple Neck Guitar and the Reversed Slide Neck, to over 20 countries with crowds of up to 12, 000 people.  Luca has even grabbed the attention of famous bands such as Red Hot Chili Peppers, Metallica and Walk Off The Earth. This will be Luca´s third time touring as a member of International Guitar Night.

Thu Le is an international, award-winning classical guitarist and certified guitar teacher. She began playing at the age of four under the guidance of her father. She had the honor of being the youngest-ever student admitted to the prestigious National Conservatory of Music in Hanoi. She has graced stages around the world, performing as a soloist and hosting a series of successful master classes throughout North America, UK, Europe, the Middle East, and Asia, as well as regular performances in her home country of Vietnam.  In addition to her solo work,  she collaborates and performs with orchestras, in string quartets, and in duets with violinists and flutists. This will be Thu Le’s IGN debut.

Inspired by the beautiful Hawaiian landscapes of Hana and Maui and the sounds of the islands, Jim “Kimo” West was drawn to Hawaii’s iconic guitar style, “ki ho’alu” or “Slack Key guitar.”  He has gone on to become one of the world’s foremost Slack Key players, garnering millions of streams on Spotify and Pandora. West is a 2021 Grammy winner for his CD “More Guitar Stories” and a 2019 Grammy nominee for his album “Moku Maluhia”. He is also a three-time Na Hōkū Hanohano (Hawaiian Grammy) nominee and a winner of the LA Treasures Award for his efforts in keeping this important acoustic tradition alive. His work as long-time guitarist for internationally renowned funnyman, Weird Al Yankovic, garnered West four Grammys and a Billboard #1 CD debut for 2015’s “Mandatory Fun”. West’s latest solo release is “Ka Honua Maluhia” (2021).  This will be West’s second time joining the International Guitar Night tour.

Lulo Reinhardt, the grandnephew of the legendary guitarist Django Reinhardt, has carried on the family tradition while incorporating new Latin rhythms, a style he calls Latin Swing.  Known for his strong percussive playing and lightning solos, Lulo is the most revered member of IGN, having appeared with four previous lineups in addition to hosting this year’s edition.

Capacity for this event is capped at 50% as per Provincial Health Orders, so only 630 tickets will be sold.

We reaffirm our commitment to providing our audience, performers and patrons the opportunity to experience arts and community connection in a manner that is as safe as we can possibly make it. We are following all provincial safety guidelines as we value the safety of our audience, artists and staff and the trust they put in us.
Vaccine passports and photo ID are required for everyone 12 and up and masks are mandatory within the venue.