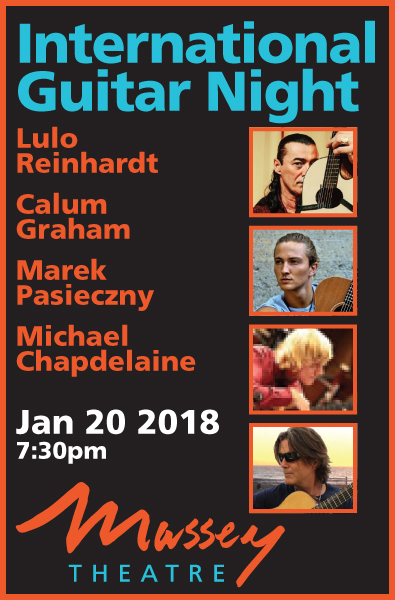 Simply the best guitar showcase in the world

After the resounding success of last year’s show, the Massey is thrilled to again present the critically acclaimed International Guitar Night.   Germany’s Gypsy Jazz legend Lulo Reinhardt will return as the show’s host and will be joined by three new guitarists: Calum Graham, the young Canadian contemporary sensation who has a two-handed style, Marek Pasieczny, Poland’s innovative classical composer/ performer, and award-winning American guitarist Michael Chapdelaine who has won both the Guitar Foundation of America Classical Guitar Competition and the National Fingerstyle Championship for steel string guitar. Enjoy these four unique virtuoso guitarists in a spectacular evening of sound that only guitars can create.