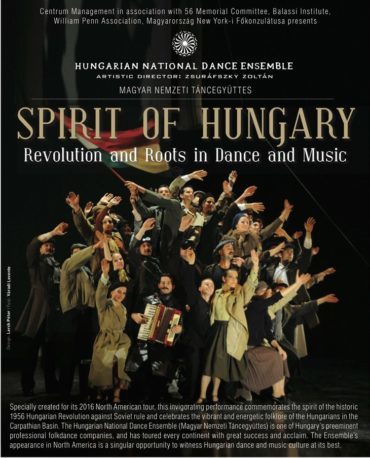 THE HUNGARIAN NATIONAL DANCE ENSEMBLE (Magyar Nemzeti Táncegyüttes) Established in 1949 in its original form, the ensemble has been touring the world with significant success. The ensemble is under the artistic direction of the acclaimed choreographer Zoltán Zsuráfszky, whose successful productions have mesmerized North American audiences starting with the Csárdás – Tango of the East, Gypsy Spirit – Journey of the Roma and the Spirit of Hungary -1956 shows. The Ensemble recently completed
a triumphant tour of Japan and of Transylvania. The 2018 North American Tour is a special engagement to commemorate the 170th anniversary of the 1848 Hungarian revolution and present authentic Hungarian folklore in a dazzling performance.

“THE SPIRIT OF FREEDOM”

The first part of the show will feature thematic dances commemorating the 1848 Hungarian revolution. This event was a historic fight for freedom, which eventually brought significant social and economic changes in Europe, shaping the continent’s future towards a turbulent 20th century. Several of the leaders of this revolution also participated in the American Civil War and helped to formulate modern American politics and society. The Ensemble’s choreography will pay homage to this historic event and will allow
a glimpse into the era when national identities became a vital force in the forming of the countries of Europe as we know them today.
“ROOTS OF HUNGARIAN DANCE”

The second half of the program will feature authentic Hungarian folk music and dances from the Carpathian Basin. The roots of Hungarian dance date back to the Early Renaissance and beyond. Due to Hungary’s location in the heart of Europe, its folklore may be the most complex among the continent’s cultures. It has influenced neighboring nations, while at the same time absorbing many of their cultural jewels. Most importantly these expressions of authentic folklore have been well researched and expertly documented by leading scholars. Zsuráfszky’s choreographies and the ensemble’s superbly trained dancers and musicians are able to re-create on stage the authentic aura of remote villages, showcasing their astonishing cultural treasures.