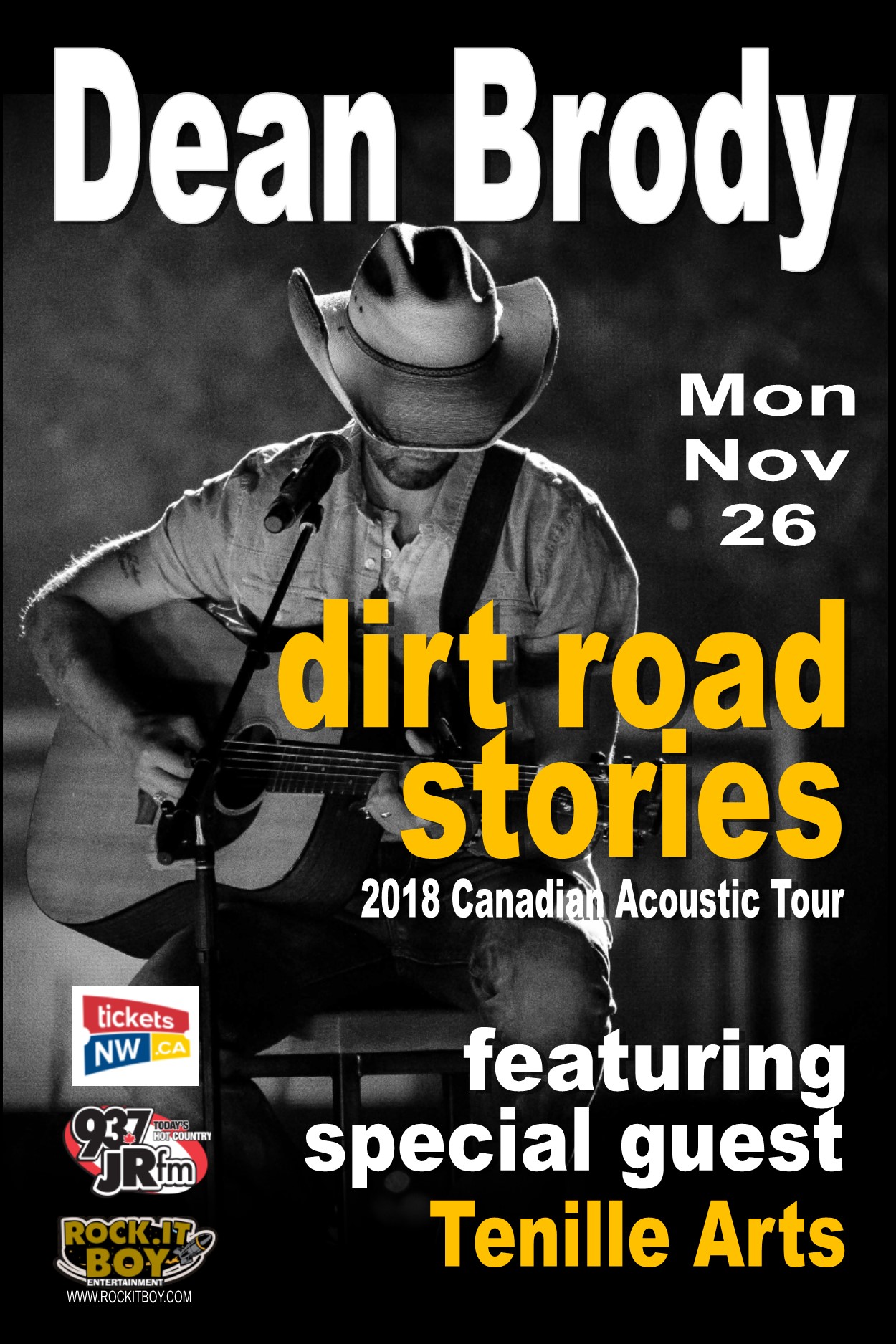 MEET AND GREET PACKAGE TICKETS AVAILABLE.  FOR DETAILS AND TO BOOK – CALL THE TICKET CENTRE 604 521 5050

Current CCMA Fan’s Choice, two-time Juno Award winning artist and celebrated songwriter, Dean Brody will be hitting the road this fall for the Dirt Road Stories Tour.  This compelling, intimate acoustic tour showcases Brody’s depth as a songwriter, and his unparalleled ability to bring storytelling to the forefront of country music and is presented by Rock.It Boy Entertainment and 93.7 JRFM with special guest Tenille Arts.

Fresh off of his second headline show at Budweiser Stage in Toronto on August 17, Brody is a three-time winner of the CCMA Award for Songwriter of the Year, and is currently nominated for “8th Day”, from his sixth album, Beautiful Freakshow, which hit the #1 spot on the Nielsen BDS and Mediabase Canadian Country Airplay Charts earlier this year.  Brody’s reputation for penning thoughtful, articulate, original narratives in music began back in 2009 with the release of “Brothers”, a touching song about a loved one leaving for the military, which resonated both north and south of the border. Celebrated songs such as “Trail in Life”, “Another Man’s Gold” and “Bounty”, have gone on to place Brody in a unique category all his own, rising beyond the conventional tracks that can be heard on mainstream radio, with Brody recently landing his 22nd Top 10 hit at country radio, with “Good Goodbye”. His ballad “Time” (2016), laments on the passing of time, becoming especially poignant in a social media era with less one-on-one interaction with loved ones, earned critical acclaim and a great deal of recognition, showcasing Brody’s unique ability to make people think about their actions through his lyrics.

Many of Brody’s songs were written at his kitchen table, and the acoustic tour is meant to replicate that intimate setting that inspires his original works.

Born and raised in a small, Canadian prairie town Tenille Arts dream of performing took root at the age of eight.  After years of hard work she began the long trip to Nashville.  Her determination and talent paid off in spades as she saw her 2016 debut EP, Tenille Arts, peak at #1 on the iTunes Canada Country Album Chart as well as crack the top 100 on the U.S. iTunes Country Album Chart.  The EP produced the wildly popular “Wildfire and Whiskey”. Tenille’s hauntingly mysterious “Cold Feet” helped grow her fan base with a video that reached #1 on the CMT 12 Pack Countdown. The song has also received much critical acclaim, including a rare feature article on an independent release by Tom Roland in Billboard Country.

Arts released her first full-length album Rebel Child in October 2017 having co-written 10 of the 11 songs. It debuted at #2 on the iTunes Canada Top Country Albums Chart, #12 on the All-Genres Chart, and reached #17 in the United States.

Tenille caught the attention of Popculture.com and was recently named a 2018 Artist to Watch. She enjoyed her national television debut on January 29th, 2018 on ABC’s hit show The Bachelor where she performed “Moment of Weakness” for a viewing audience of several million. The song debuted in the top 20 on the iTunes U.S. Top Country Songs Chart.

We Deserve to Work