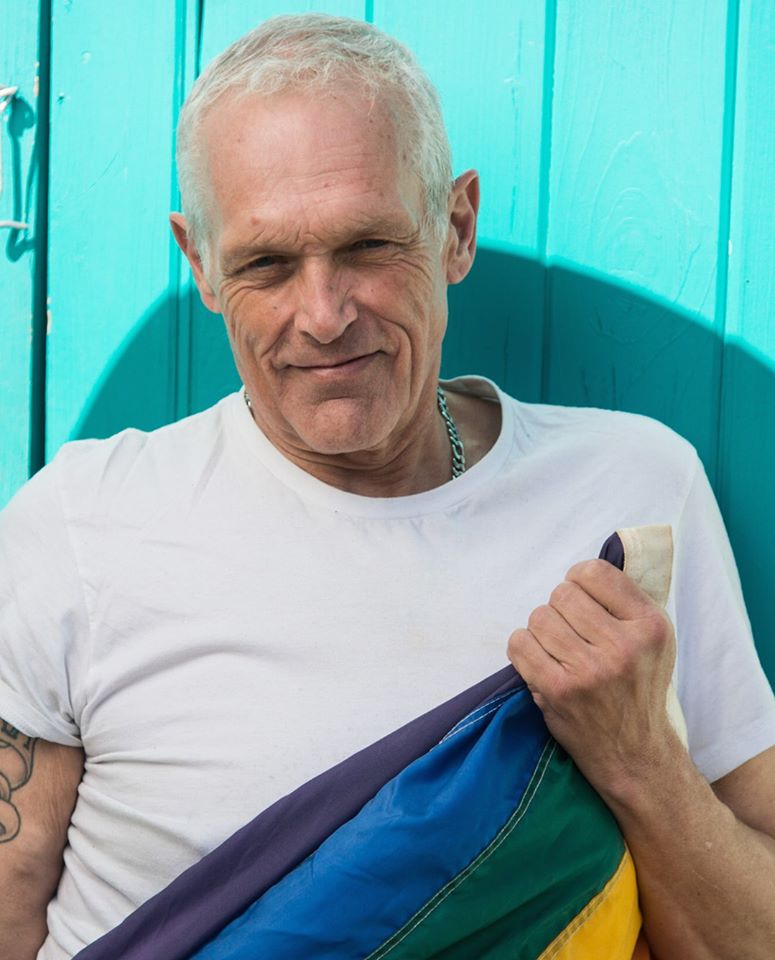 Reflections on Pride from Allan Morgan

We’ve had the honour and pleasure of working with the incredible Allan Morgan for over a year…a relationship which we hope continues forever. As we enter a completely different New West Pride week, Allan had some reflections on Pride and how his relationship to it has changed.

He did an amazing recording of the piece which we are happy to share with you, in addition to the script.

We hope it moves you as much as it did us.

THE JOURNEY THUS FAR
Whenever I go for a drive or a trip with a friend I enjoy following along on a map. Not necessarily navigating, but wanting a visual narrative perhaps to help me understand where we’re at.

I think it is much the same with life. As I get older I look back on this map of my life thus far and of the story which I have created that goes along with it. The path to Pride both personally as a gay man, and as a gay man in a community seeking radical liberation is a big part of my map, my story, my artistry. I write about my sexuality and pride and my life thus far in order to understand it a bit better and to help to shed some of the unwanted baggage gained growing up in a world where gay and proud were not anything to celebrate.

The first political action I ever did as a gay man, a proud gay man, was to march across from the church where Anita Bryant, a right wing Christian heading a campaign to deny rights to gays and lesbians was speaking in Scarborough Ontario when I was living in Toronto in 1976, and like many of us that political activity has never stopped since. How could it stop? Once I had accepted that I was gay, born that way, and that it was an intrinsic part of what makes me human I knew that society’s opinions and laws about homosexuality had to change.

The road to Pride has been long. For every victory there was a setback, for every setback another setback. Google it all. Scroll through year by year, check it out.

We lost a decade and far, far too many friends and lovers and artists and loved ones and brothers and sisters to the last pandemic, HIV- AIDS. We remember them and we lift up their names.

After that storm – eventually the rainbow, and the movement for gay & lesbian civil rights gained momentum here and much of the western world. Rights were enshrined and closet doors closed as community beckoned.

PRIDE MAP
We can now marry and divorce, adopt and foster children and live our lives as full citizens in many countries of the world as a direct result of the hard work and bravery and conviction of so many who knew we were right and that more love is never a bad legacy. I am proud of these achievements and happy to experience the profound sea–change in the public perception of who we are.

Although Gay pride has become huge and ubiquitous with a season of gay prides in various cities throughout the world, our country and our province, I consider it an important and essential celebration. Well, I used to.

A few years ago cracks started to appear in the wall of Pride. Discussions and conversations began to appear, questions of who should be involved in our celebrations. At the pride parade in Toronto a few years back Black Lives Toronto stopped the parade with a counter protest.
A demonstration by mostly black women protesting the racism and exclusion of Pride and the parade, as well as the presence of the police in the parade.

That demonstration engendered a conversation not only within our community but across the country. Like many of us I had a firm narrative of Pride – the story I told over and over again about the events and politics that happened and how we got here from there and some fairly firm opinions about inclusion in our celebrations and, like many also felt my activism gave me a stake in these decisions and licence to opine about them.

Last year we celebrated the 50th anniversary of the Stonewall uprising, an event generally described as the beginning of Gay Liberation. As I read literature about the riots I began to realize that my story of Pride and our journey was incomplete, white washed. The role of black transgender women at Ground Zero of Stonewall was indisputable and indelible. I made edits to my map and began to look for more.

Which brings us to now. 2020. The year everything changed, the year of the pandemic.

As it was unknown territory there are no maps, nothing to assist us in navigating our way in a world unknown to us.

For many of us there was no work, we were to stay at home, wash our hands frequently, wear gloves, masks, not venture out trying to flatten a curve so as not to overwhelm the healthcare system and to protect those vulnerable among us. In one of the greatest act of solidarity and love in human history we did just that.

It became our new reality and the combination of no work amidst an event unprecedented in our lives we had time to think ( and bake bread, sew masks, spend quality time with our families, help neighbours and bang pots of thanks for those in harm’s way.)

We also became very aware at this time of the huge inequities in our society of the path walked by black, indigenous and people of colour as opposed to our own path. Here in Canada the need for reconciliation with the original indigenous Sovereign Nations whose land our ancestors appropriated from them with no recompense, grew bigger. Black lives matter both in the United States and here took to the streets to shout their outrage at the continuing systemic racism, and at the continued murders of black citizens by the police.

Cracks in the narrative now seemed to be happening everywhere, not just to Pride, but societaly as well.

We worried that the whole thing might collapse, but as Leonard Cohen says in his song ” Anthem” the cracks are where the light gets in.
Pride 2020 for the most part is a virtual celebration meaning that there are no huge parades,no blocks long shutdown as we have in New Westminster, no coming together in person because of the virus. So we have watched online celebrations and activism around the world. We have been able to see more clearly I think the plight of so many in our community around the world.

Personally I came to understand that my narrative, my map needed to be rethought, redrawn and retold. That liberation meant liberation for all, not just some of us. I also came to understand that there is much reading and listening and hearing and questions that need to be asked by us, that there is much work to do to be as inclusive as we can be, to help give ownership to others in the movement that have fought racism and hate and deserve to have their say in helping to move us all forward.

THE PATH FROM PRIDE
The future Has no map. We have to draw it. I don’t know where we go or how we get there oh, but I do know that my sense of “we” is different now. It has grown. We is now bigger, more diverse, more inclusive, more colourful and more powerful. That fuller definition of ” we” will be even more unstoppable and more undeniable. Within that “we” are many new leaders and people of vision who will take different roads different routes and I for one am looking forward to that adventure.

Happy Pride to everyone of you Beautiful Creatures, wherever you are on the gender River, and to all of us in our sexualities and our queerness and our colours, and to all of our allies that march with us.

Let’s put our maps together and find a new route, but let’s keep moving forward. That’s the only path that really matters.