PRIDE: For the Young Gay the Un-Gay and the Jaded Queen in All of Us 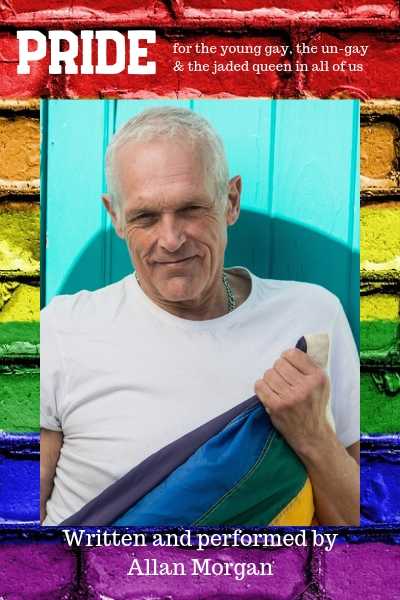 On stage for a limited run of four performances, Massey Theatre’s current artist in residence, Allan Morgan, will share his one person show PRIDE: For the Young Gay, the Un-Gay and the Jaded Queen in All of Us.   Written by Morgan, the experience follows his path from 1968 forward, chronicling his life as he begins to understand and accept his sexuality and recalls the connections and inner conflicts between his life and the Gay Pride movement. It is the story of one person’s journey though homophobia – both internalized and societal – toward the light of acceptance and love.

Allan shares his incredible story up-close and personal in a unique staging where you will be seated on the Massey stage – creating an informal storytelling presentation complete with cookies served with love.

Allan is very pleased to be back on the stage where he has been at home for more than thirty years. Some highlights include appearing in London, GB, Adelaide Australia, Wellington NZ and San Francisco, all with The Overcoat. He appeared for several seasons at Bard on the Beach, notably in The Tempest as Prospero, as well as King John, A Midsummer Night’s Dream and Much Ado.

He has toured across Canada with the Electric Company in Studies in Motion. He has appeared at The Belfry, notably in The Drawer Boy, Dirty Blonde, and I am My Own Wife for which he received the Victoria Critic’s Award for best performance. Other favourites include Red, Thinking of Yu, and Abraham Lincoln Goes to the Theatre for ATP in Calgary.   He has also just completed a run of his one man show he wrote, I Walked the Line.

This production is part of Massey Theatre’s Under the Rainbow program.