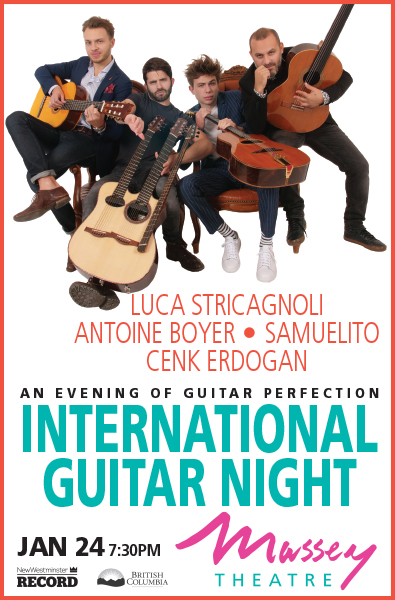 Each year, International Guitar Night’s founder Brian Gore invites a new cast of guitar luminaries from around the world for special concert tours of North America highlighting the diversity of the acoustic guitar.

Luca Stricagnoli was born in 1991 in Varese, Italy. Since he was a young boy he showed a great natural talent with the guitar. He began playing classical guitar at the age of 10 but not long after decided to quit for 3 long years. After rekindling his passion he taught himself new and original playing styles, which included performances with different instruments.  He also developed non-conventional ways to play the guitar that enabled him to win many talent shows. At 22 years old, Luca was signed by US label “Candyrat Records”. His debut videos for the label gave him great internet success (14 million views on Facebook and 7 on YouTube).  In addition to public acclaim, he began attracting major attention from famous guitar players all around the world. Now at 23, Luca is requested to perform all over the world.

Antoine Boyer was a Gypsy Jazz prodigy as a teenager.  He was a disciple of such masters as Mandino Reinhardt and Francis-Alfred Moerman, with whom he recorded his first CD-DVD in 2009, acclaimed by French and American critics (Jazzman, Vintage Guitars). Antoine also performed Francis-Alfred Moerman’s works in tribute concerts at the Angers Gypsy Swing festival in 2010, as well as the Django Reinhardt festival (Samois) in 2011.

Samuel Rouesnel, aka “Samuelito,” born in 1993, started classical guitar at the age of seven at the Conservatoire de Caen (Normandy, France). He was soon fascinated by world music, and particularly flamenco, which he discovered through the powerful singing and guitar playing. Samuelito followed a dual classical and flamenco guitar path, which led him to meet many great performers (Paco de Lucía, Ramón Sanchez, Roland Dyens, Gérard Abiton, Arnaud Dumond, Ibrahim Maalouf and many others) and made him a very eclectic musician.
His first concert took place on the day of his 16th birthday on the national stage of Caen, broadcast by France Télévisions. It was the beginning of an international career (France, Spain, Germany, Croatia, United States…). \

Cenk Erdogan was born in Istanbul in 1979.  In 1997 he won a four-year scholarship at Istanbul Bilgi University in the Music (Composition) Department.  In 2001 he graduated with First Class Honors. In October 2004, at the invitation of David “FUZE” Fiuczynski, he held a workshop at the Berklee College of Music in Boston MA on fretless guitar and modes in Turkish music. In 2008 Cenk recorded his first album “WITH”, which was produced by Sinan Sakizli for Baykus Music. The same year, with the “Aria” soundtrack company, he composed and arranged the soundtrack for the movie “Issiz Adam”, which was written and directed by Çagan Irmak, and won the Yesilçam “Soundtrack of the Year 2009” prize. In 2016 Cenk conducted and arranged for the Orchestra of “Sezen Aksu,” which is the diva of Turkish popular music.  His composition “Sezenli Yillar” has been performed at 6 concerts with a 35 piece orchestra and visual and dance shows. Cenk still works as a producer, composer and arranger for television and gives concerts as a solo guitarist and with the Cenk Erdogan Trio.