Join curator/host Cassius Khan and a variety of highly accomplished musicians and tea specialists as they immerse you in the cultures of the world, bringing you conection to generations past through songs and experiences that have endured for thousands of years.

On May 8th, renowned Chinese musician Lan Tung is the honoured artist for an illuminating afternoon of music and refreshments. This event is free and welcome to all. 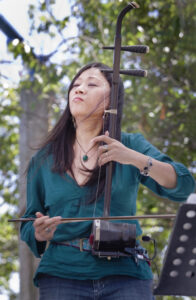 Lan Tung’s music often experiments with contradictions by fusing materials from different traditions and genres, such as the sense of breath/space from Chinese music, the rhythmic intricacy from Indian influence, the precision in contemporary compositions, the space for interpretation with graphic notations, as well as melodic or textural improvisation. Lan’s compositions and performances are released on numerous CDs, winning International Independent Music Awards and multiple nominations by JUNO, Canadian Independent Music Awards, Canadian Folk Music Awards, and Western Canadian Music Awards.

Lan started to learn the erhu at the age of 10 and went to the Chinese Music Department at Taiwan’s Chinese Cultural University. With the support of the Canada Council for the Arts and the BC Arts Council, she has studied graphic score with Barry Guy in Switzerland, improvisation with Mary Oliver in Amsterdam, Hindustani music with Kala Ramnath in India, Uyghur music with Abdukerim Osman in Xinjiang, and Mongolian horsehead fiddle with Bayar in Hohhot, China; as well as making multiple trips to perform with improvising musicians in Germany, Switzerland, and the Netherlands. At the Vancouver Creative Music Institute (2007-2009), she has studied and performed with Han Bennink (Holland), Barry Guy, Evan Parker, John Butcher (UK), Francois Houle, Paul Plimley…etc. 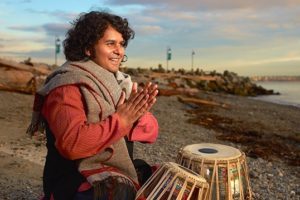 This event is free and welcome to all.

Presented with the support of the City of New Westminster, Province of British Columbia, BC Arts Council and Metro Vancouver