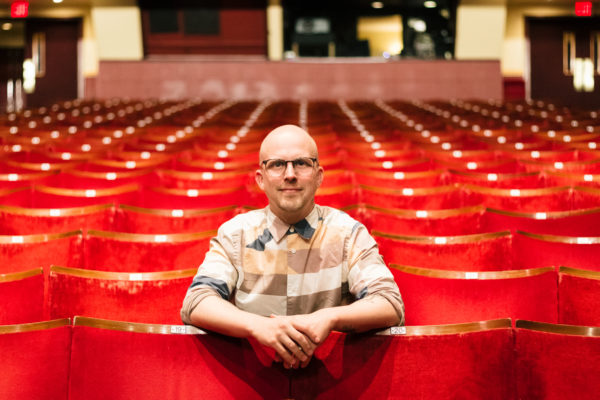 We wanted to take the opportunity this Father’s Day to introduce you to one of the Massey Theatre Staff who help make our theatre such an incredible place.  Shawn Sorensen, Massey Theatre Co-Technical Director.  In the almost three years he’s been at the Massey Theatre, he has become a true father figure to many. Not because of his age but because of who he is. A man who is filled with grace and humility who leads by example. Someone who stands up, stands beside, lifts up and amplifies the people around him. He is what a father should be.

Shawn does a lot. At work, at home, and in his ‘off time’ (we’re not sure where he finds this off time to be honest with you). He wears many hats. And socks. He has over 15 pairs of very fancy stylish artisanal socks. And he even has a favourite pair. 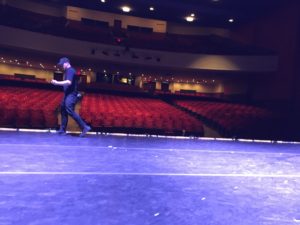 At Massey, Shawn is Co-Technical director. He and Stephen Jackson ensure that our theatre technical operations run smoothly and seamlessly, making everything onstage looks like it happens magically. Shawn is also our Safety lead, which has meant extra work and care during the COVID-19 pandemic. He and Stephen also mentor the next generation of theatre technicians by volunteering to lead the NWSS Tech Club. 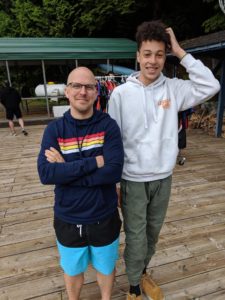 Shawn and his ‘little brother’ Tyrus

As a volunteer, Shawn is a Big Brother to Tyrus. He and Tyrus have been teamed together for four years, and during that time they have grown a friendship and relationship that goes beyond a volunteer mentor/mentee role. They have learned from each other and become better people in the process. There are over 200 kids waiting for Big Brothers or Sisters sisters right now in Metro Vancouver. Luckily, Tyrus isn’t one of them thanks to Shawn. 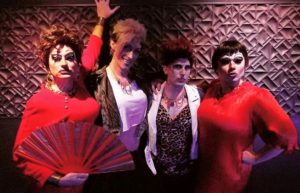 Shawn also served on the board of Zee Zee Theatre for five years. Zee Zee Theatre is a Vancouver based theatre company, devoted to telling diverse stories and amplifying the voices of those on the margins. As a board member, Shawn lent his voice, and his body, to lift up and amplify. He recently left Zee Zee’s board as he accepted a position on the board of his housing co-op.

Shawn and his partner Meghan are parents of two girls. Dagny who lives in their hearts and their delightful spark of a rainbow baby, Oona. Losing a child is devastating and almost impossible to navigate. Their experience in loss led them to become surrogates for a family they met in the loss group that Meghan was leading.

In his spare time (Really? Spare time?) he dreams of being a cicerone. He has started a beer book club and is further exploring his love of beer as a father figure WITH a father figure. We follow his adventures on Instagram and we think you should too.

We asked Shawn what he loved most about working at the Massey and being a dad.  He said he was proud of the  programming we engage in, which often means something directly to him. Our organisation tries very hard to identify the inequities and disparities within our community, and bring relevant and accessible programming, when we do do it. And the best part of being a dad is having the opportunity to bring more love and empathy to the world through his daughter.

Shawn’s Dad joke: When does a Dad joke become a Dad joke. When it’s apparent.