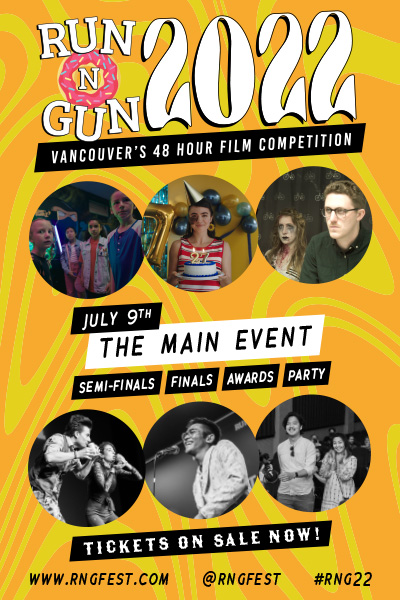 Run N Gun 48hr Film Competition and Festival is Vancouver’s biggest indie filmmaking competition and event with over 100 films programmed in a week of film screenings and madness.

The competition format and rules force filmmakers to think outside the box by giving them only 48hrs to write, shoot, and complete a short film (4:30min), AND giving them three three unpredictable elements that must be included in the film as the competition kicks off. These elements could be an object, line of dialogue, theme, character, etc. Each filmmaker must then find a creative way to include the elements in their films that they deliver at the end of the competition.

We are pleased to present the finale of this year’s festival in the form of a day-long celebration of film and creativity at The Massey Theatre. Join us for screenings, mixers, awards show, and after-party!

Kicking off at 3pm is our Semi-Finals Screening, showcasing the Top 21 – 40 films created during the 2022 competition weekend. This screening will be followed by a Filmmaker Mixer with food and fun at 5pm. The main event kicks off with the Finals Screening of the Top 20 films, all eligible for awards, at 7pm. The Finals Screening is directly followed by the Awards Show, where we find out who takes home this year’s amazing prizes, and it all rolls into our High-School Dance themed After Party hosted from 10pm – 1am.

Filmmakers from every team who submitted their film will be in attendance, as will industry professionals and sponsors, fans and supporters, and maybe a few folks who stumble in off the street. Join us for Vancouver’s biggest celebration of independent filmmaking!

The films in this program are unrated. All ages are welcome, but some viewer discretion is advised.