Senior age 65. Children 12 and under are free but tickets are required – PLEASE CALL THE BOX OFFICE – 604 521 5050 for child tickets as they are not available online. 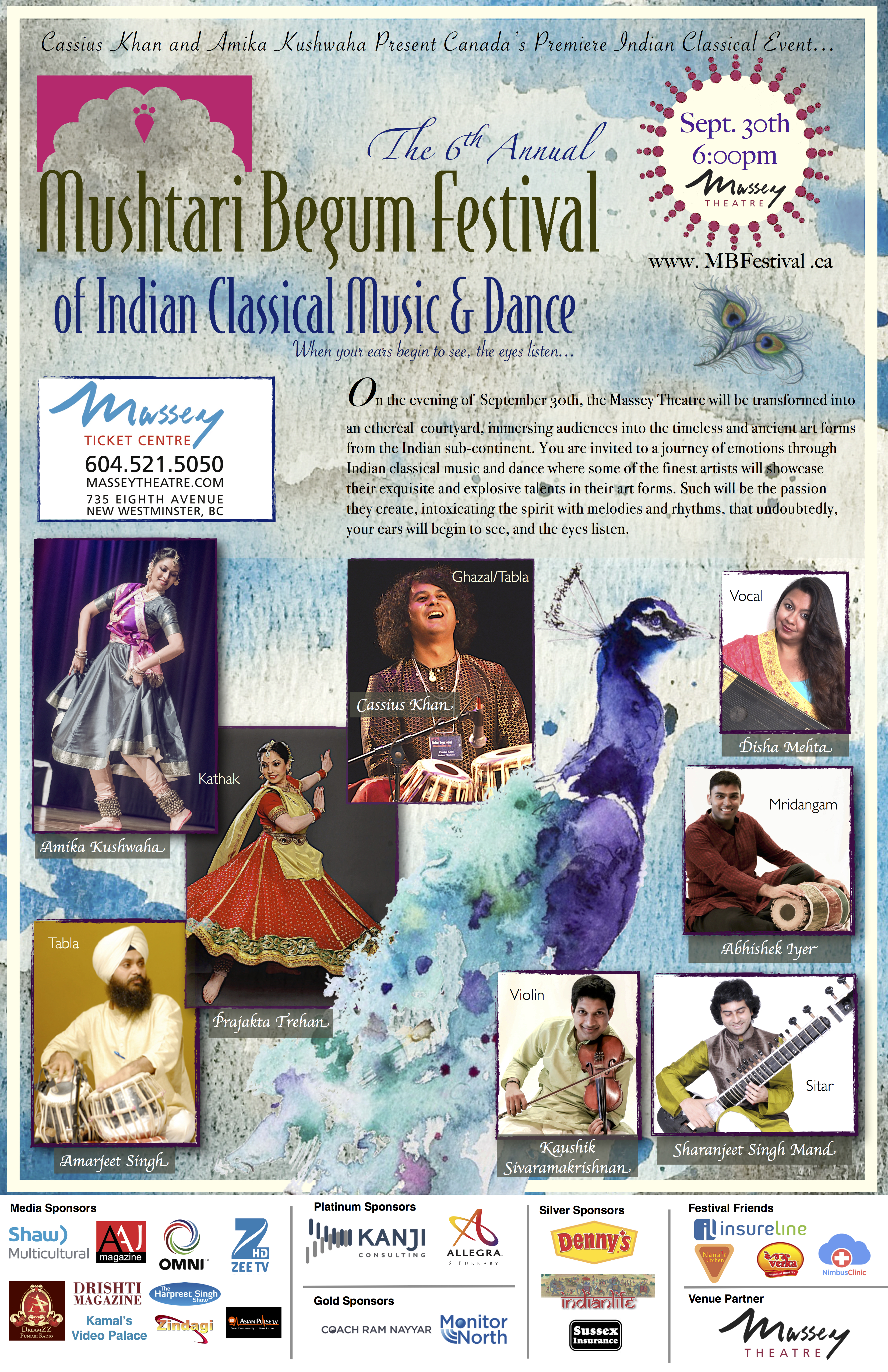 On the evening of September 30th 2017, the Massey Theatre will be transformed into an ethereal courtyard, immersing audiences into the timeless and ancient forms of Indian Classical music and dance. Founded by New Westminster’s globally recognized Cassius Khan and Amika Kushwaha, the 6th Anniversary Mushtari Begum Festival of Indian Classical Music and Dance, which is a tribute to his guru, the late Ghazal Queen Mushtari Begum, is inviting you to experience a journey of emotions through these rare classical arts performed live.

Some of the finest Canadian and Indian artists will showcase their explosive talents at this one of a kind festival. Headlining performances will be given by Western Canadian Music Award nominees Cassius Khan and Amika Kushwaha. Cassius Khan will showcase his trademark mastery of singing Ghazals while simultaneously playing the Tabla, and the graceful and powerful Kathak dancers Amika Kushwaha and Prajakta Potnis Trehan will enthrall the audience with their difficult and complex Kathak Dance, alongside Sitar Maestro Sharanjeet Singh Mand’s melodious and thrilling Sitar. Ustad Amarjeet Singh, the renowned Tabla maestro, will deliver a powerful Tabla solo recital with Baljit Singh’s sonorous and haunting Dilruba. Mridangam artist Abhishek Iyer and the Chennai based Gold Medal awarded Carnatic Violinist Kaushik Sivaramakrishnan, the young Carnatic music duo from Edmonton, Alberta, will delight the audience with their playful and lilting performance. Dr. Disha Mehta, Cassius Khan’s most gifted protege, will soothe the audience with her silky voice, singing her debut ghazal composition on stage at the MBF.

Each artist will perform exquisite and traditional numbers in their respective art forms. Such will be the passion and enchantment they create, intoxicating the spirit with melodies and rhythms, that undoubtedly, your Ears will begin to see and the Eyes listen!

There are no upcoming events at this time.